Some may believe it’s one of those plans, one commissioned by a branch of government simply so officials could profess their eyes are on the future of the area over which they govern, but that definitely does not seem to be the case with the master plan developed and adopted in 2015 by the board of directors for Grand Vue Park.

The biggest difference between the majority of those studies and the blueprint for this park’s future is simple to comprehend; the park’s general manager for the past eight-plus years, Craig White, uses the vision as a guide.

And now there are four “treehouse” cabins stilted along a ridgeline once untouched although situated within the borders of Grand View. 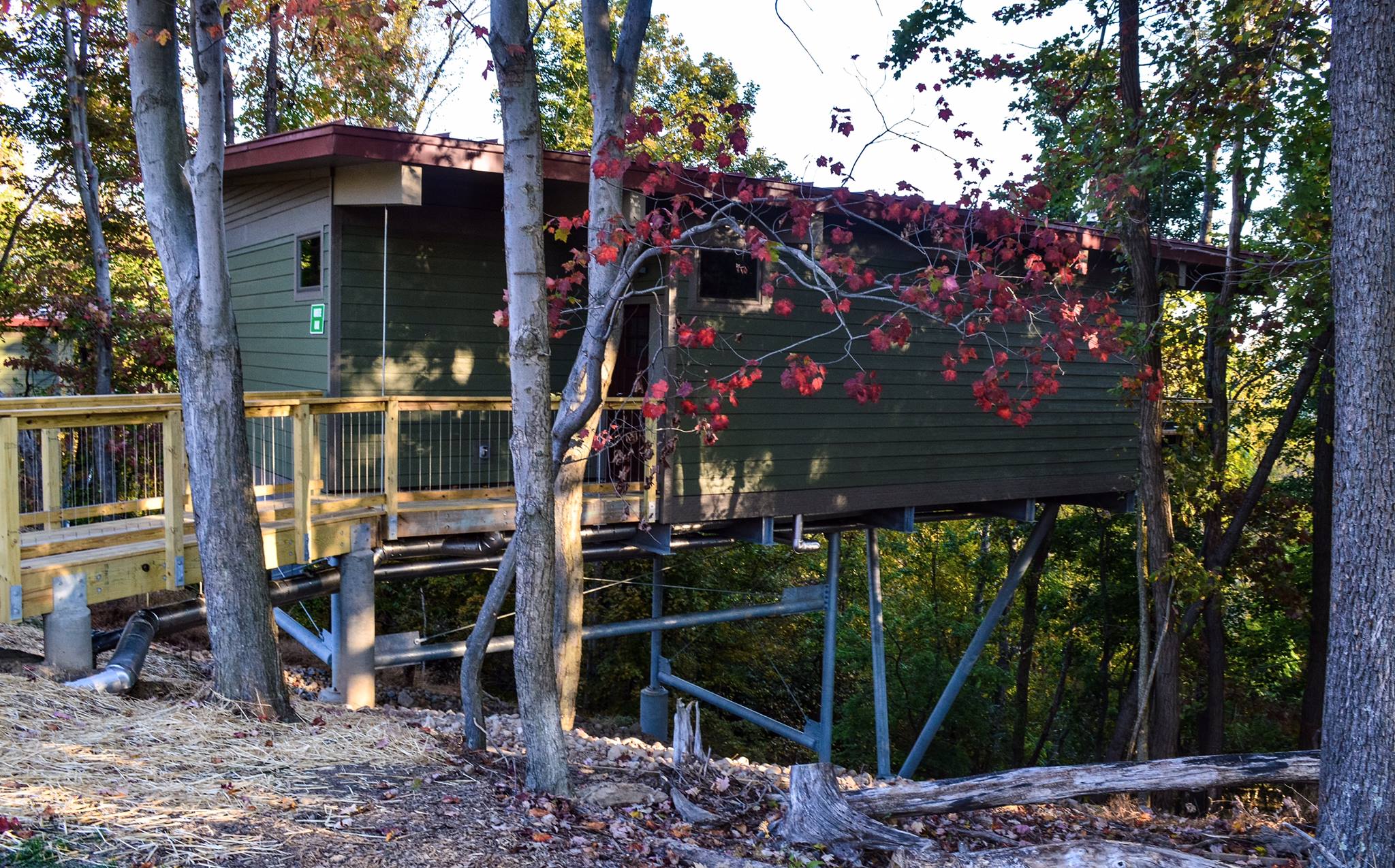 The treehouse cabins are stilted in an area of the park never utilized before.

“That’s what the master plan is all about. How can we maximize the unused property that is included within the borders of Grand Vue Park?” he said. “And the response has been great, and right now the treehouse cabins are booked solid for the weekends all the way through November. The biggest challenge we have now is getting the word out about them beyond that 50-mile radius that our local media outlets cover with the good work that they do on a daily basis.”

There is a pair of two-bedroom cabins, one of which is 100 percent ADA compliant, and two cabins with one bedroom. Each of the units features a queen-sized sleeper bed, seating, and a hot tub on the deck, an eating area, a completely equipped kitchen, and a full-sized bathroom. The living rooms feature 50-inch flatscreen televisions, the bedrooms are equipped with 43-inch TVs, and each of the cabins is equipped with WiFi. 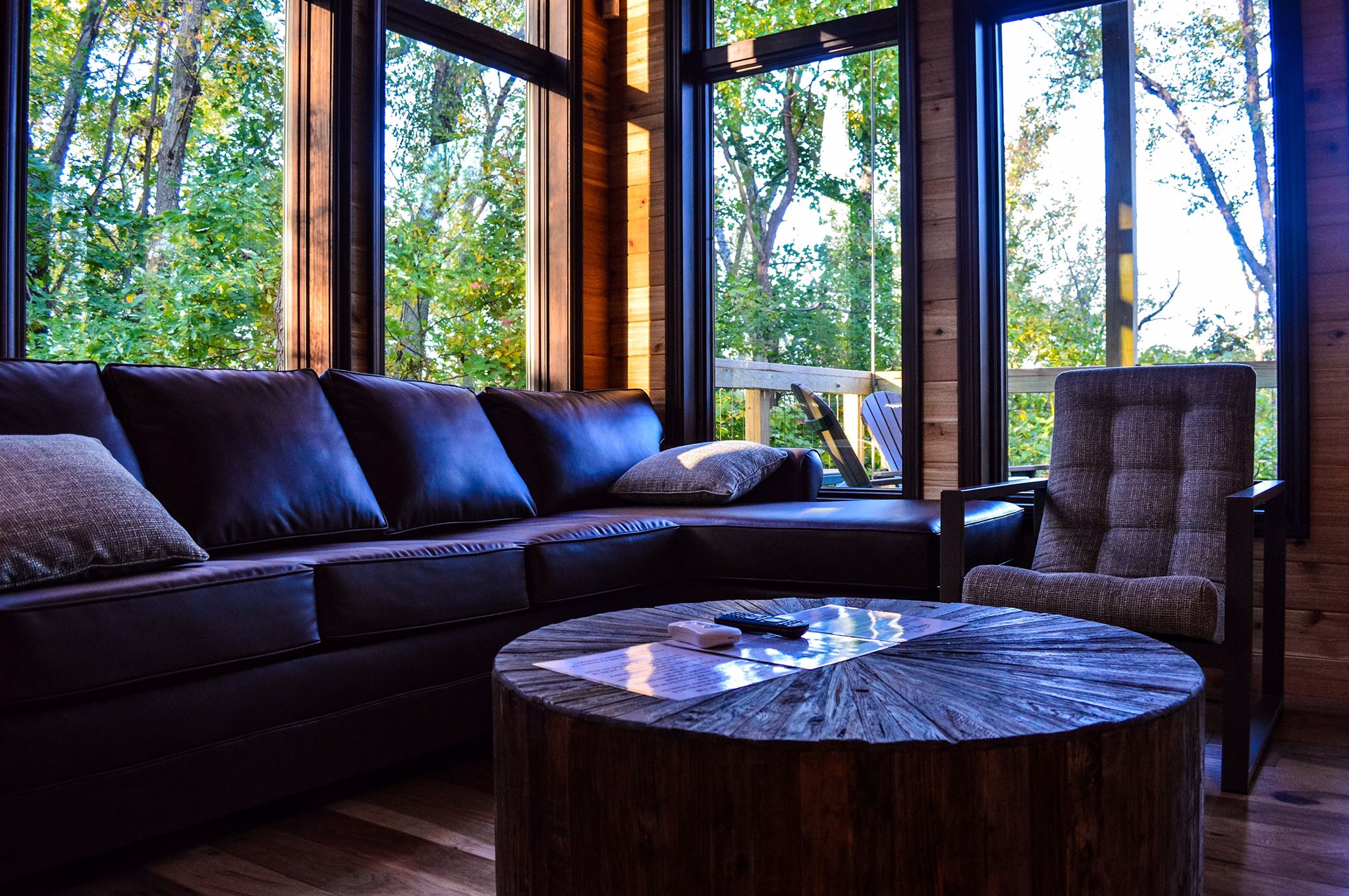 The living room areas of the treehouse cabins are surrounded by nature that visitors will enjoy no matter what the weather may offer on the other sides of the many windows.

The living room areas of the treehouse cabins are surrounded by nature that visitors will enjoy no matter what the weather may offer on the other side of the many windows. “Our treehouse cabins have everything that you would want in your house,” White explained. “And everything inside each of these cabins just looks phenomenal, and we have a hot tub on every deck.

“The hot tubs are a feature that we received a lot of requests for when people were renting our other cabins, and sometimes people refused to stay here because those cabins do not have the hot tubs,” he continued. “So this opens us up to that clientele, and these treehouse cabins are not as huge as our other cabins, and a lot of people seem to like that fact, too. But now we can offer the family getaway or the husband-wife getaway that we didn’t have before, and they can have a lot of fun here in the park if that’s what they want to do.”

Along with the renovation to the park’s banquet facility, the addition of two disc golf courses, the construction of an observation deck overlooking the city of Moundsville, and the renovations of eight cabins and golf course to make way for tent camping, White has orchestrated the building of Grand Vue’s 2,100-foot zipline, the canopy tour zipline course in 2012, the addition of the Aerial Adventure Park in April, and now the “treehouse” cabins that became available on Oct. 1. 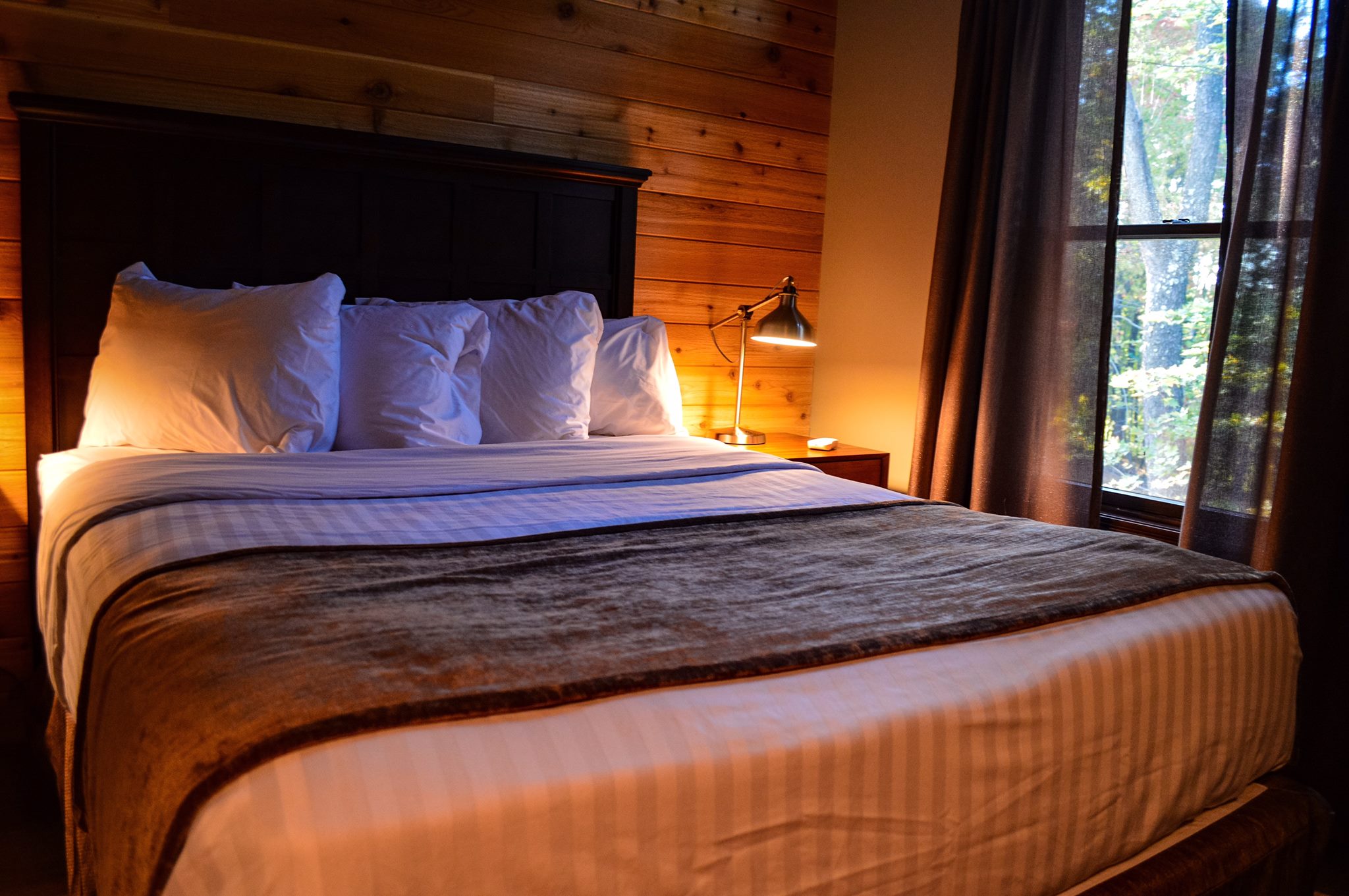 Each living is equipped with a 50-inch flatscreen TV and every bedroom features a 43-inch model.

Each living room is equipped with a 50-inch flatscreen TV and every bedroom features a 43-inch model. The cost of reserving a one-room “treehouse” cabin is $199 per night, and the two-room version is priced at $249 per night. Reservations can be made by calling 304-845-9810.

“What we did was add an amenity to the park with the Aerial Adventure Park to go along with our ziplines, and then we added the treehouse cabins,” White said. “A 30-room lodge is included in the master plan for the park, but the cost of that would have put us in debt at the time, so we decided to build the new cabins with our oil and gas money so we didn’t have to go into debt.

“And we wanted to be unique. When we sat around that table to talk about the master plan, one of our goals was to do something very different for this area, and someone at that table offered the treehouse cabin idea,” he continued. “The Omni Associates out of Fairmont took it from there, and when they brought their ideas to us, we really liked them. It’s a stilted building that rests among the trees, and that doesn’t exist anywhere else in this area.” 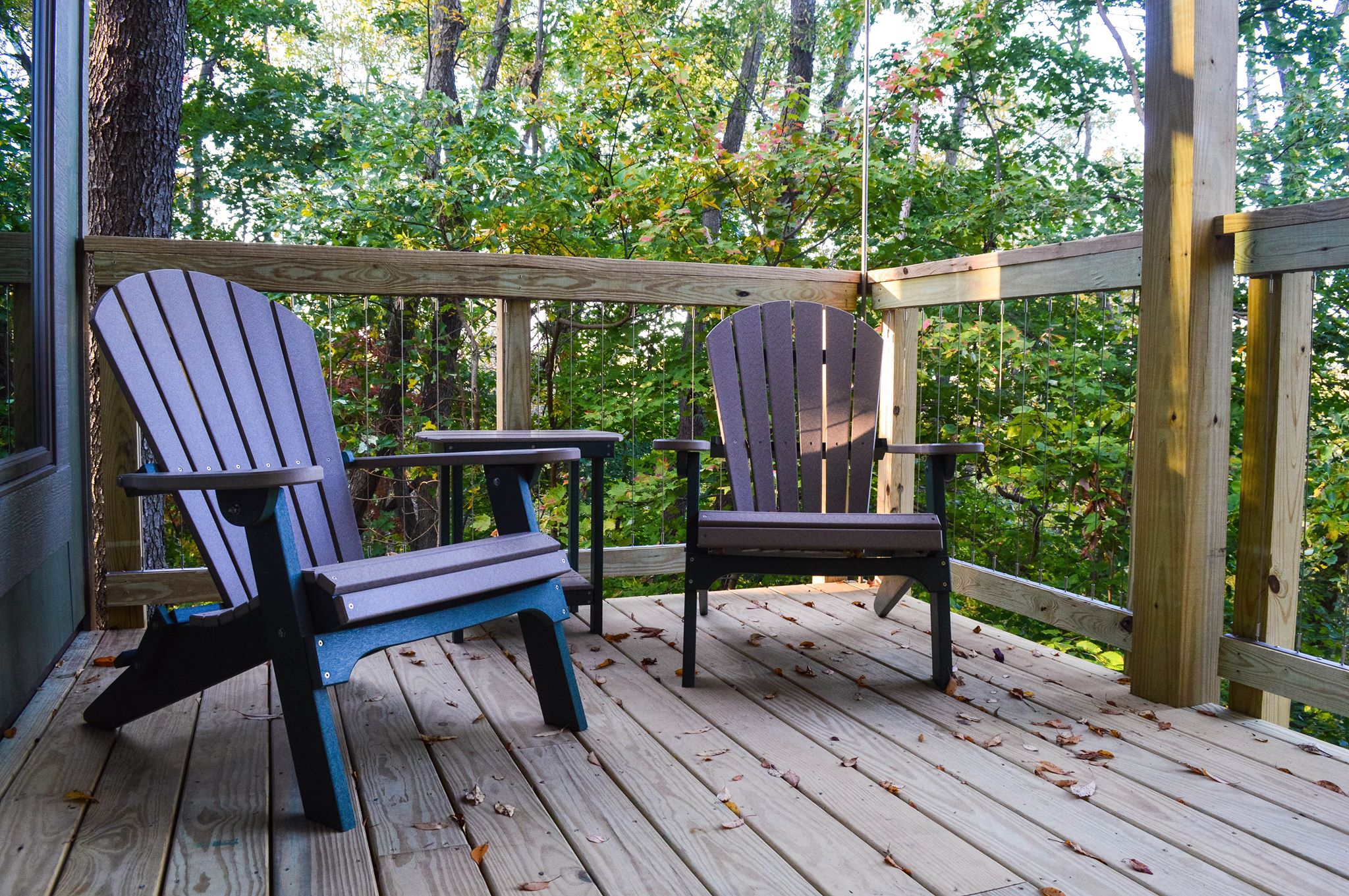 Each of the new cabins offers a deck that sits among the trees at Grand Vue Park.

Each of the new cabins offers a deck and a hot tub that sits among the trees at Grand Vue Park. And, as long as the lodging option proves a positive, there could be more built in the years to come.

“Our master plan has 10 of these treehouse cabins in this area, and right now there are two more areas prepped and ready for the construction of two more treehouse cabins,” White revealed. “So there are a lot more opportunities that we see for Grand Vue Park, and the objective is to continue moving forward with the development of the land that’s not been touched since the park was established.”

White admits that when he was initially hired in August 2008, he was, at first anyway, a bit shy to invite his friends and family to the facility. Previous management addressed the pool area, the amphitheater, the roadways, and parking areas, but these days Grand Vue Park welcomes people from all states within 300 miles of Marshall County. 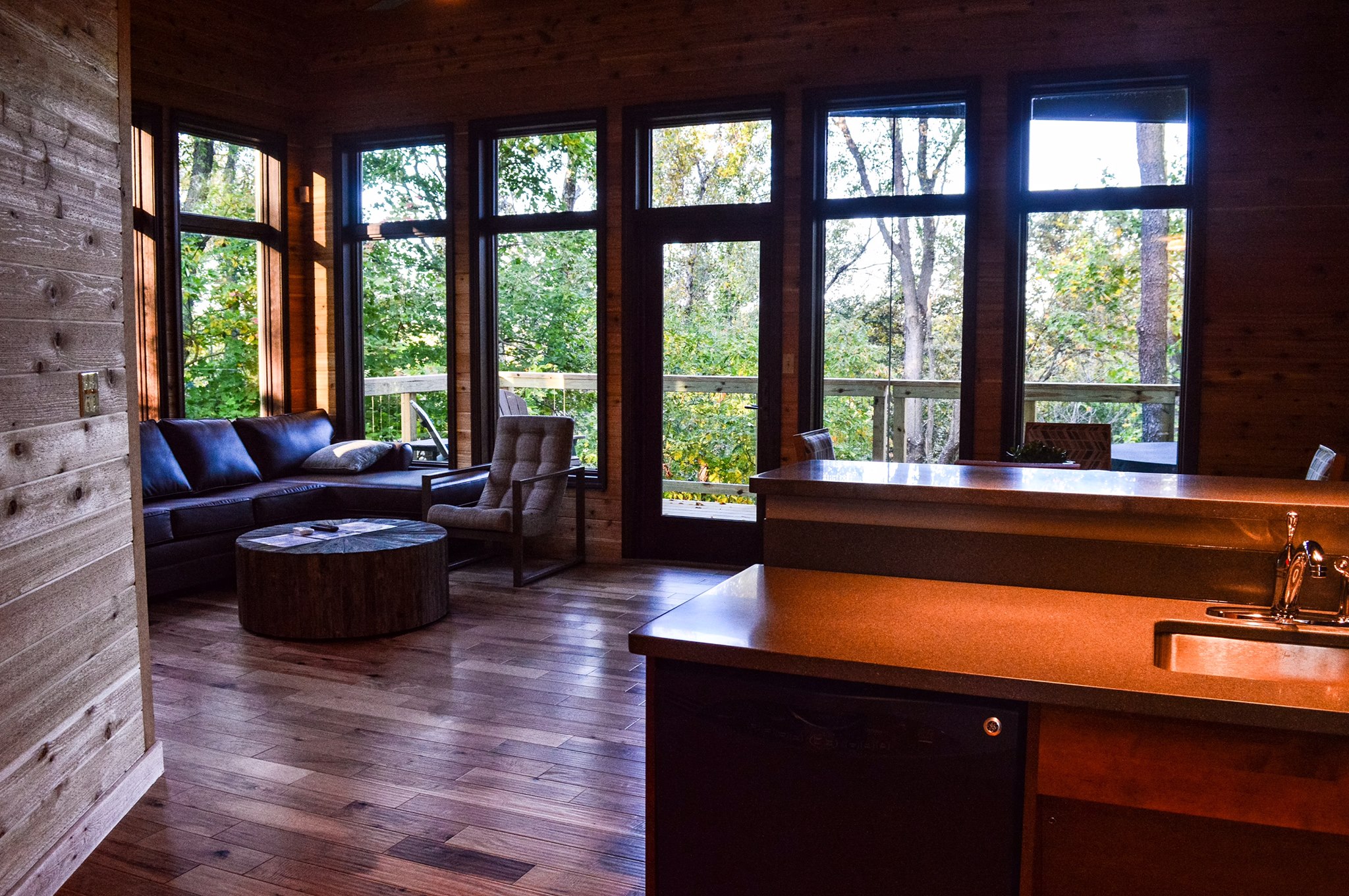 One of the new cabins is a two-bedroom unit that is completely ADA compliant.

One of the new cabins is a two-bedroom unit that is completely ADA compliant. “It’s true; I was nervous to invite people to come see the park. I just didn’t think we were quite ready for that just yet,” White said. “But now that we have added what we have added and now we have added lodging with something very different than what is offered anywhere in this area, we are more than ready to welcome anyone from anywhere here to Grand Vue Park.

“Our staff is awesome, and they take a lot of pride in this park because they have seen what it can become in the future,” he continued. “When I arrived here, there were only three other full-time employees, and now we have 10 full-time employees. That’s a great example of the commitment of the Marshall County Commission and a sign of the growth that’s taken place over the past eight to 10 years.”

Joining Grand Vue Park as popular attractions in Marshall County are the former West Virginia Penitentiary, the Palace of Gold, the Mound Museum, the Fostoria Glass Museum, and the Cockcayne Farmhouse, but only 12.5 miles to the north rests the city of Wheeling, where the Wheeling Island Casino, Centre Market, Heritage Port, the Wheeling Skatepark, Independence Hall, and Oglebay and Wheeling parks attract thousands of visitors each week. That’s why, more than ever before, tourists converging on the Upper Ohio Valley these days are covering both Ohio and Marshall counties so they can enjoy all of what is available. 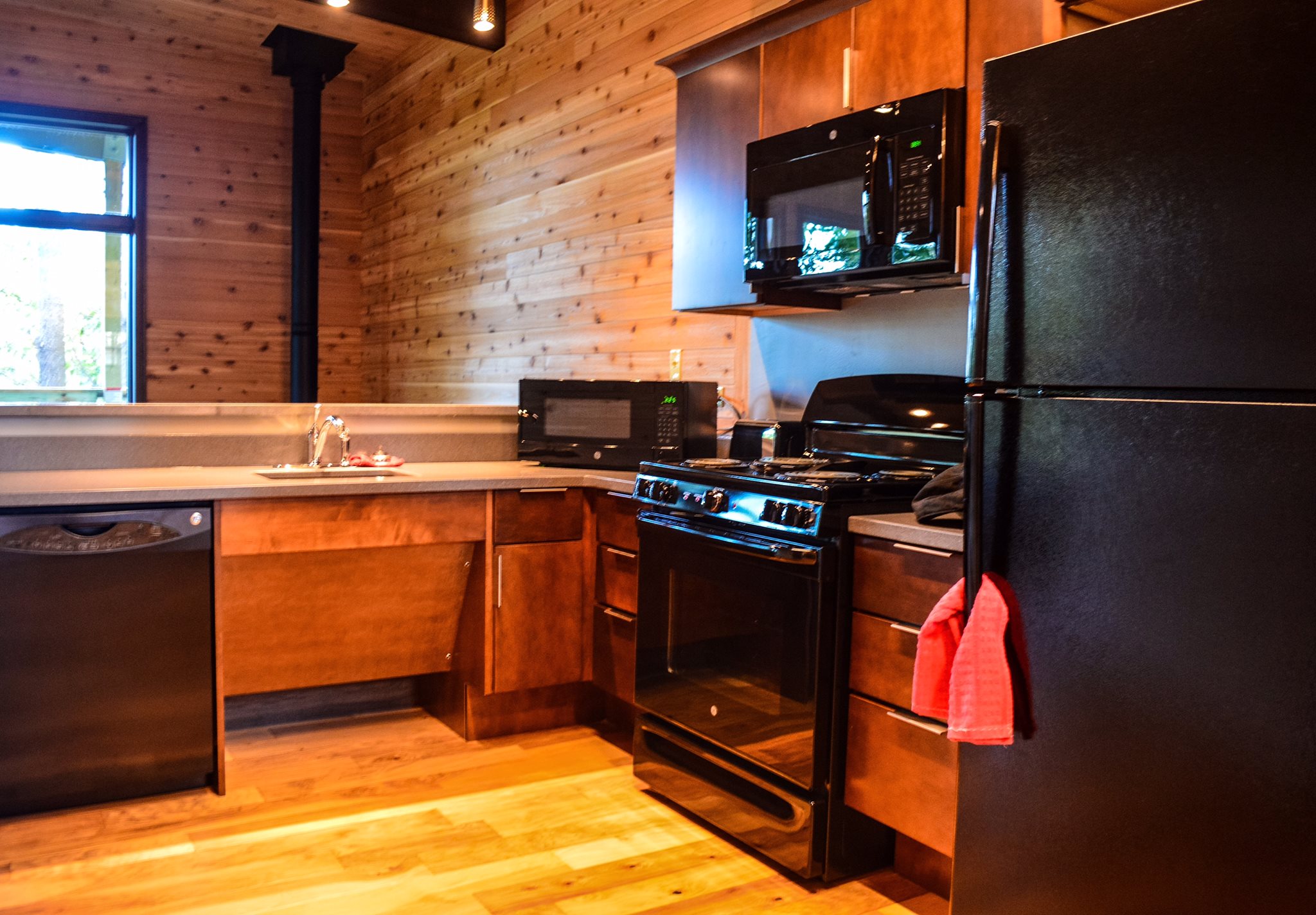 All the comforts of home have been installed inside the new cabins.

All the comforts of home have been installed inside the new cabins. But with the uncertainty involved with the state budget and how many tax dollars may be received for operations in the future, White finds himself focused on long-term sustainability that is based on patrons in the park instead of the coal industry.

“A big part of our goal here at Grand Vue Park is to have a lodging option for the people coming to this area for a visit for whatever reason,” the general manager explained. “We have so many attractions here, not just in Marshall County, but also throughout the Upper Ohio Valley, and that’s why so many people are coming here and staying with us and either doing one or more of the activities that we offer here or heading out and doing two or three different things in the area. 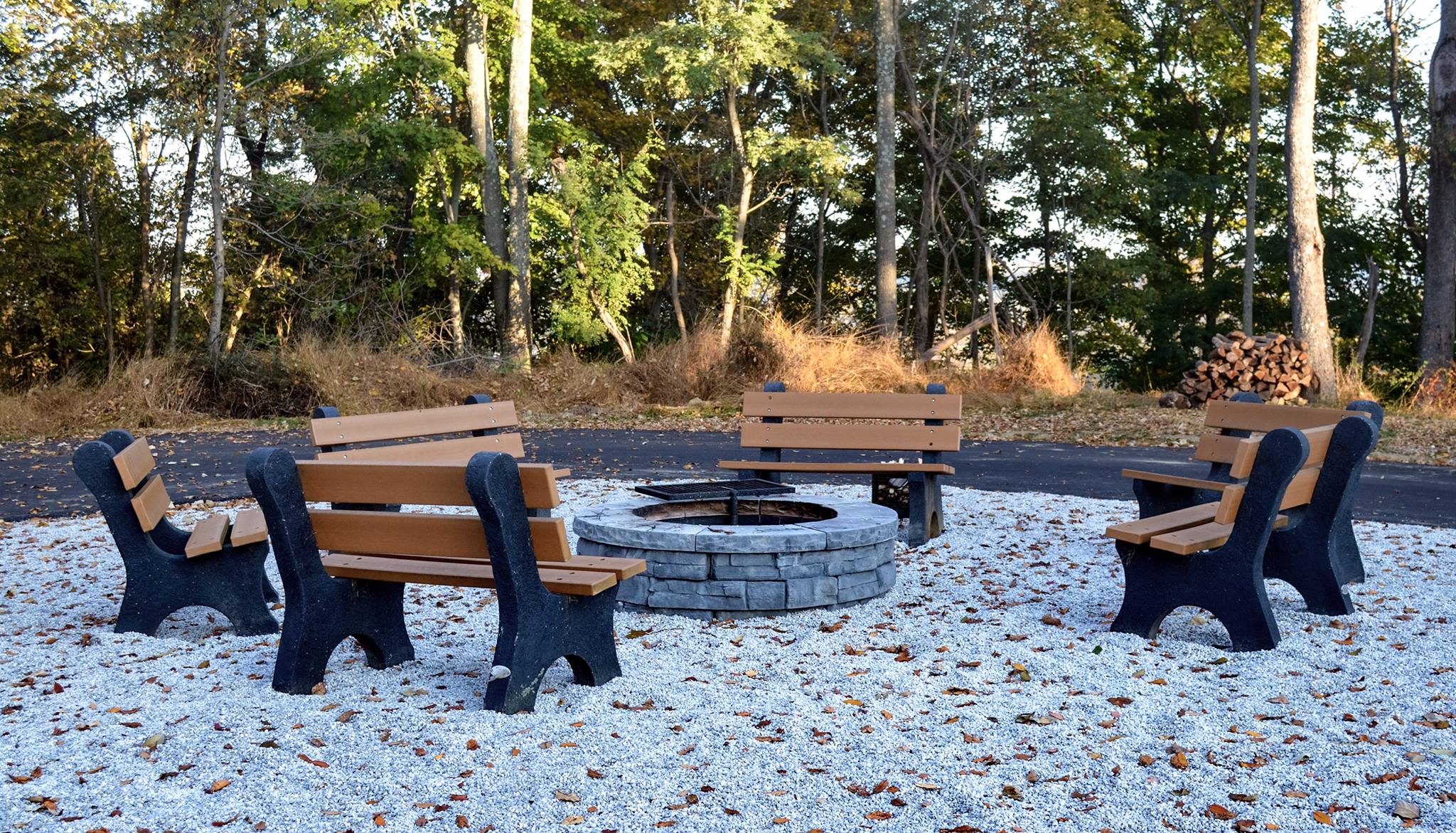 A community fire pit was installed for the occupants of the four treehouse cabins and Grand Vue Park supplies the wood.

A community fire pit is available for the occupants of the four treehouse cabins and Grand Vue Park supplies the wood. “When looking at the future of this park, we knew lodging was something that we were going to have to do because as a county park we have to figure out a way to add to our revenue generation because right now we are funded from the coal severance tax dollars that are received by the county commission,” he said. “Those dollars are on the decline, so finding other ways to help sustain the park is a must, and lodging is one of those ways.

“We’re excited for everyone in this area and throughout the region to see what we have done here with the treehouse cabins,” White added. “They offer an experience never before offered in this area; that’s for sure.”

Relax In The Trees At Grand Vue Park