Ghost Adventures at the WV Penitentiary 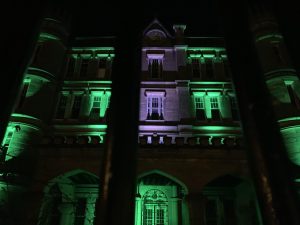 There are several paranormal hotspots that lure investigators and guests to seek answers. The Chapel where inmates and guards alike would make their pleas to a higher power; The Shower Cages that played hosts to murder, fights and rioting; Death Row where over 94 inmates served their final hours on this earthly plane; and the “Sugar Shack” where a multitude of illegal activities from rape to drugs to murder took place in the inmate recreation room. Are the spirits reliving the nightmares they faced?

From full bodied apparitions to the slamming of cell doors and disembodied cries – the penitentiary offers the investigators and guests alike a bone chilling experience. Will you be brave enough to undergo a lone vigil in the shadows of the electric chair, “Old Sparky”?