Balarama Purnima at the Palace of Gold 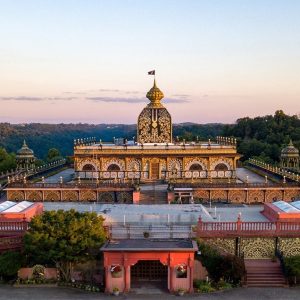 Balarama Purnima
August 3rd
Appearance Anniversary of Lord Balarama
Lord Balarama is the first expansion of Lord Krishna appearing as His elder brother eight days before Krishna’s appearance in this world. While Krishna’s complexion is like a dark bluish cloud, Balarama’s complexion is like a white autumn cloud. He assisted Lord Krishna in His earthly pastimes of protecting the devotees and ridding the world of the misguided. Whilst Krishna is known for carrying a flute whose beautiful sound enchants His devotees, Balarama holds a plough in His hand that represents His strength. Devotees fast till noon on this day, followed by a feast in His honor.